Locked Down in New Zealand

Not an original heading in these uncertain times as our customary life is turned on its head. Our thoughts and hopes are with our friends around the world. For the first time in over 20 years Annie and I are hunkering down for a winter in New Zealand.

Any plans to return to Antiope in France in the near future have been taken out of our hands. However this enforced lock down has prompted me to reflect on a lifetime of messing about in boats with the adventures afloat that I have shared along the way. It has also given me the time and motive to open up my photo archives.

For a while now I have also been gathering material for a second book, 'Waterway Magic'. This will be a follow up to 'Swatchway Magic' which was a modest little book of stories co-authored by Paul Antrobus and myself and was first published 9 years ago. It was unashamedly a nostalgic look at our old haunts on the East Anglian coast of England. The current book is a tale of my adventures in a variety of boats on inland waters from a young age through until today. Below are a few pics of the boats that have shaped that life afloat.

That voyage to the Baltic was a life defining experience. Whether it was an act of bravado or recklessness, the motive is the subject of the longer story. David and I survived and friendships made then remain today.


Newly married to Janet a boat with a lid was a more acceptable option. Swan was a shallow draft barge yacht. For four years we cruised the coastal and canal waterways. but Swan was just a touch too wide for the narrower English canals. In recent years I found Swan again, a story by itself.

A chance find  in 1972 was this old river launch in need of a new life. She would fit the locks. It was a project rebuild. We had fun and the prospect of a profit when I had finished, neither of which really happened. 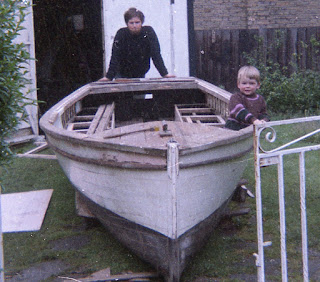 Re-purposing the launch was big learning curve during an English winter. We  gave Smaug a canal boat look and did eventually manage a few summer weekends aboard before the opportunity to move to New Zealand forced a quick sale.


Rolling through a whole chapter of life in a new country, holding down a real job, having a family to raise, a house or two to build, a sad but amicable parting of the ways with Jan, not forgetting a fair bit of sailing over the years before meeting up with Annie eventually brought me to a point when I wanted to show my new wife the magic of the waterways.


So we fast forward to the 90s and our first experience with narrow boats, this tired old hire boat  which we renamed Water Gipsy was intended to be a short term 'do up' cruise it and sell it project. Five years later we were hooked on the waterway lifestyle, but the old boat was getting tired and needed increasing maintenance.


Water Gipsy, yes there is a story behind the name, took us to the far reaches of the English waterways, but she did have her off days and we were frequently hosting visitors who often had to patiently wait while I took the engine apart. We needed a larger and more reliable craft.

The answer was to build our own boat, or at least fit out a custom built hull, and incorporate our own ideas.

In 2002 we took delivery of a bare 64ft hull and over the next 5 months completed the fit out.
She was built and fitted out to comply with RCD regulations to which our surveyor ensured compliance.


We kept the name Water Gipsy and hosted many guests for a further 6 years. Water Gipsy turned out to be everything we wished for but by 2007 I wanted a break from cruising the now all too familiar English waterways, What about France? Within two years we had bought Antiope refitted her and crossed the North Sea to Europe where we have cruised for the past ten years.


Meanwhile, I must get on with the book.

Keep safe all of our readers, we will get through this.

Posted by Antiope Cruising at 03:25