The Netherlands at last

After a frustrating few weeks waiting for a weather window we made a dash for it across the North sea direct to Holland, or more correctly the Netherlands.

The Queen Mary passes us at Dawn, mid crossing
Mid way across, and just before dawn we saw what looked like a small ferry boat overtaking us, but it was way off the normal shipping lane. It grew in size and became the Queen Mary, she slowly cruised around us and carried on her way.

Antiope moored in Middleburg
From the comfort of the Middleburg yacht club we can look out on Antiope snug in the calm inland waters.
Now able to relax a little, look out for more regular Blog updates
Cheers Charles and Annie
Posted by Charles Scoones at 01:49 1 comment:

Antiope survived the harsh English winter well snug ashore at North Fambridge.
We arrived at the end of May, to be told that Summer was last week, indeed since getting aboard the weather has been turbulent, Only last week the East of England was declared a drought Zone, on the same day that the heavens opened. It seems to have rained every second day since.. 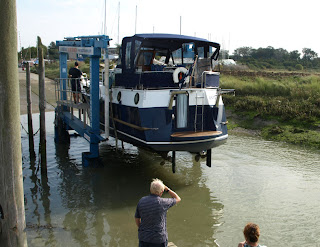 Launch day  June 7th
A few jobs remained to be done from last season, not least replacing two exhaust systems and giving the topsides a fresh coat of paint.
Once in the water we set off for our sea trials, the first was a run down river to Burnham on Crouch, where on the stroke of six pm,  we were surrounded by an Optimist armada-just great to see the enthusiasm of all the kids. 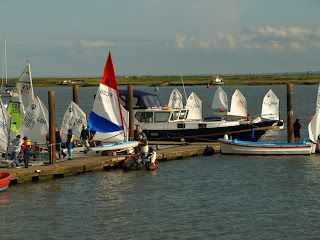 The Armada of Optimists, Burnham on Crouch
After the mandatory beer in the Crouch Yacht Club, we cast off and headed downstream on Friday evening the 10th June, to drop anchor for the first time just up the river Roach, close to where Charles Darwins' Beagle would have ended her days as a 'Watch boat', a kind of floating home for revenue officers.
These are the creeks and rivers where I learnt, in my youth, so much about messing about in boats.
Oyster catchers and Curlews woke us in the morning, scavaging the falling tide line a few metres from us.
Taking the last of the tide down river and out to sea, we picked our way from buoy to buoy through the 'Swin' and up with the new flood tide to Maldon on the river Blackwater. 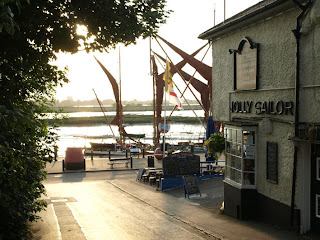 The Jolly Sailor, the Hythe, Maldon
Here we moored with the fleet of restored Thames Barges on the Hythe. Two old  waterside pubs serve the mix of sailors that gather here. The tide leaves us high on the mud for 10 hours. 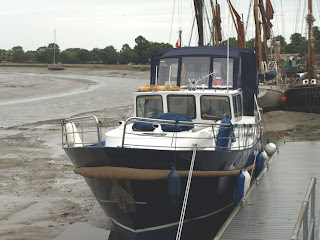 Antiope waits for the tide
We left on the next morning tide, heading down river then up the coast. 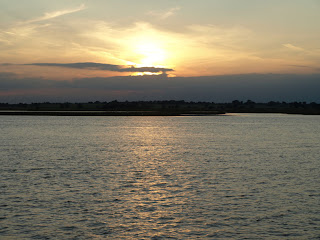 Walton backwaters BBQ time
The evening found us anchored in the Walton Backwaters These secret waters were made famous by the author Arthur Ransome. in 'Coote club'.  A BBQ on deck completed the day.

Satisfied now that Antiope is ready for the crossing to Holland, we are now looking for a weather window.
Motor boats can be uncomfortable in rough sea, so we are prepared to wait. As I write we are tied up in Ipswich Dock at the head of the Orwell river, High winds are forcast for the next few days, but there are several old haunts here to explore, we will not be bored.

Charles and Annie
Aboard Antiope
Posted by Charles Scoones at 11:15 1 comment: