Blog from our August 2010 newsletter 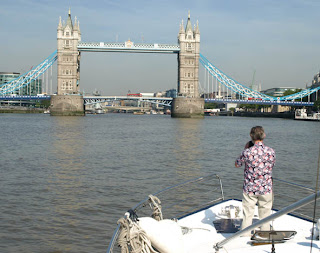 No, not quite Cologne, Paris, Amsterdam or Bruges, but with a real summer in England, cruising the Thames has been hard to beat.
We arrived in England in May to find that Antiope had fared well through one of the hardest winters for decades, and once re-launched our plan was to head out for sea trials, before making the crossing over to Europe..
We soon found that winter was not exactly over. The onboard heating system needed an overhaul, the anchor winch wouldn’t, and fuel was finding its way to places it shouldn’t. There is nothing like going to sea to find out what needs fixed! Our partners Roger and Robyn also had to cut short their cruise, called back to Australia unexpectedly.
Time to take stock..  After all, Antiope had languished, unloved in a London Dock for a year or two before we found her and since then we had only cruised a few miles in calm waters, while also treating her gently.
Better to sort the problems and finish the refit in England we thought.
Invitations to do a bit of offshore sailing were also in the air.
It did seem like a good idea to at least escape the clutches of the river Crouch before the doom merchants in the bar started muttering about us rotting in harbour.
The Suffolk rivers of the East coast just a day’s run north was my boyhood playground and worth revisiting. We soon found that driving a launch from the shelter of the cabin has its merits punching into a cold northeaster, not a trip that I would have enjoyed under sail. Ipswich dock became our home for a few weeks, this historic area long since disused commercially has been transformed into a friendly marina close the heart of town 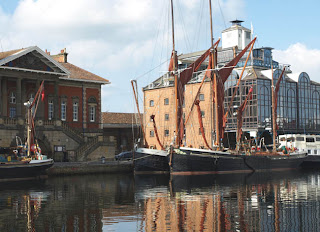 Spritsail barges in Ipswich dock.
In the days of sail, these barges would load grain and hay here to feed London. Some of these lovingly preserved Spritsail rigged barges still charter and barge races are a spectacle on this coast.
For much of June a persistent strong NE wind churned up the North Sea and ideas of exploring the Norfolk broads dimmed. A run up the Thames became more appealing all the time. After a few jobs had been ticked off, taking advantage of a lull in the weather, with an early start and a fair tide,  we made a trouble free day’s run up to Limehouse dock  London.  Antiope sensed that she was back in familiar waters. For us too Limehouse dock had been a favourite stop in the Water Gipsy days.
It also heralded a turning point in the summer weather. 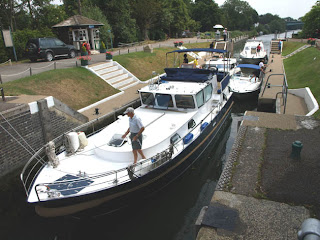 Antiope, a tight fit in a Thames lock

Locks,Bridges and Pubs punctuated our voyage over the next ten days, all the way up river to the heart of Oxford. 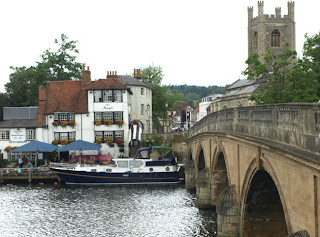 The very low arched Folly bridge was the final test, if we could clear this we should be able to navigate through most of France. For the Riverhead pub full of Oxford students with a grandstand view of the bridge, waiting for craft to get it wrong is daily entertainment. 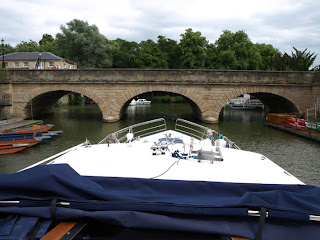 With canopy down and a careful line up we made it with 10cm to spare, winning a cheer from the shore.
Antiope was able to cruise 150 miles in from the sea, and while there always seemed to be another job to do, we have also enjoyed the company of friends aboard. It has been a busy season.
As the northern summer cools and the autumn winds start to drive the leaves from the trees, we will put Antiope to bed once more in North Fambridge, Essex. She is now much better prepared for the waterways of Europe in 2011, her crew too now have the measure of handling locks and bridges.
Our plans for 2011 have yet to be set in stone.  An Antiope website is on the job list.

Posted by Charles Scoones at 19:15 No comments: