IN ROME
I just have to show you these two pictures 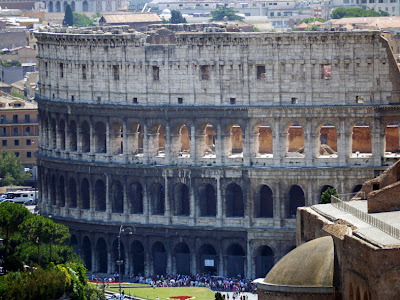 The Colloseum, Is just huge! 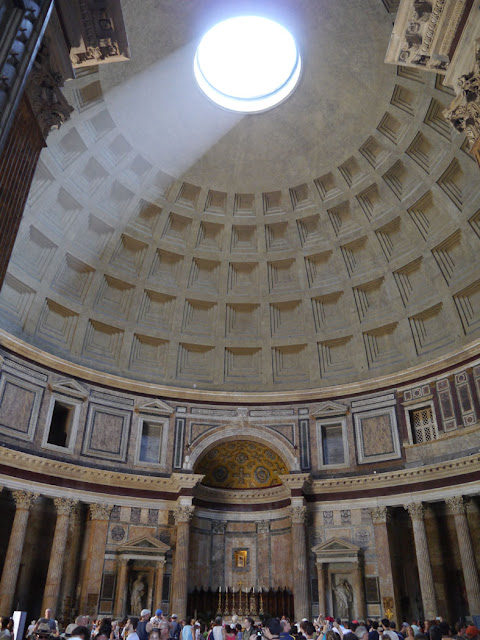 The Pantheon, is also huge, and a marvel of construction for its age, over 1600 years

We cruise through a tranquil landscape, alone on a treelined canal. The wide flat land slowly rises ahead, we see tall church spires ahead between the trees, we are coming to a town.
Two deep locks lift us out of the coastal plains. the waterway ends In a very old looking stone lined basin, a friendly habourmaster greets us, wecome to Leper, (Ypres)
Antiope is one of only three visiting boats, not many come this way by water.

We had just rejoined Antiope in Dixmuide, after travelling by train from Rome, What way to see some country! Hot dry and dusty through to snowy Alps then steep vinyard clad slopes of the Rhine gorge, however the temperature dropped as we came North and changed trains many times.
What did I know about Flanders and the 'War to end all wars' clearly not enough, We were moored only metres from the trenches where over 4 years, thousands of Belgians died holding on to the last remaining corner of their country. 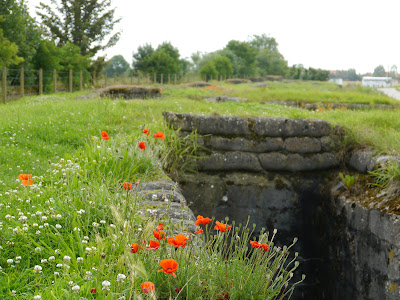 'The Trench of Death' the last line of defense for Belgium

And so to Ypres. We walk up a slight hill from the basin, newish houses give way to the now familiar flemish architechture, we arrive at the market square in all its'a 14th century grandeur, when it rivalled London for wealth and population.
What is inspiring, as the war was devastating is how thw Belgian people have rebuilt their town. In 1917 not a building remained standing, now, you would believe that within the walls all is as it was centuries ago. but for one of the ancient gateways, the Menin gate, Rebuilt as a Memorial,
which I can only describe as massive and haunting bearing the names of the nearly 500,000 commonwealth soldiers who died here. 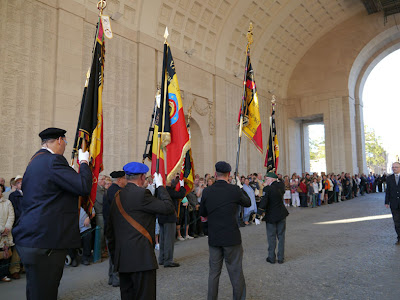 A Belgian 'honour guard', at the Mennin Gate

We attended 'the last post' the daily 8pm ceremony, when quietly 1500 to 2000 people gather. The traffic stops, the town falls quiet, and the bugles call us all to remember. 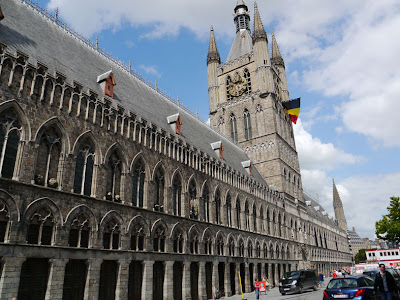 
We slip away from Ypres, back down the waterway that was the 'Front line' for four devastating years.  We reach the North Sea coast and take a day trip off Antiope, a tram ride along 30 Kms of coast. The Summer has finally arrived in Europe and it seems that the entire population of Belgium has hit the beach. 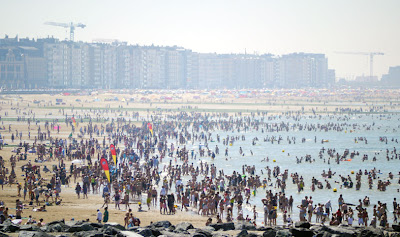 The Beach at Oostende

This will be the closest we get to the sea until we reach the Med in a season or two. for now Antiope heads inland to Brugge and Ghent. Towns that deserve a chapter of their own, watch this space.

Cheers Charles and Annie,  aboard Antiope in Sunny Ghent


Posted by Charles Scoones at 09:36 No comments: