It’s all the same but different 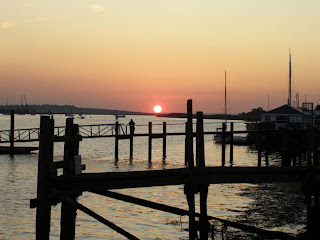 Burnham on Crouch, in Essex is where I learnt to sail, run aground, read a tidetable, drink beer and discover girls.
Here I am again, hopefully older and wiser, and this time with a big motor boat!
Yes we have bought the boat in which to explore Europe. Her name ‘Antiope’ or ant-eye-oh-pee.
It nearly didn’t happen, as our sortie to Holland failed to come up with the goods. Yes, there were some very smart and well presented craft over there but in the end, very few ticked all of our boxes and none were within our budget. It seemed that the Netherlands are not feeling the recession and there were no bargains to be had. Our funds were in Sterling which is still suffering against the Euro.
We did however find friendly folk and some wonderful old towns, owing their heritage to the waterways. We developed a must-come-back feeling, and a determination to explore the country more slowly by water, and in our own 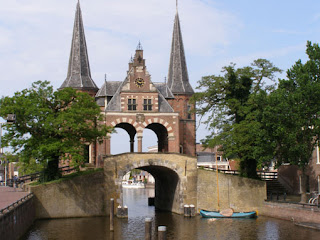 A Watergate in the Netherlands at Sneek
Taking stock on our return to England we now had a firm idea of what we were looking for in a boat.
So it was head down, back on the internet again, and there, just listed on the ‘Boatshed’ website, a sort of boating Trade me, was what looked like the perfect fit. A phone call to the broker and we headed down to Gallions Reach marina. This is a rather grand title for a forgotten corner of the old London Royal docks near Woolwich and directly under the end of the city airport runway. There, covered in a layer of avgas soot was ‘Antiope’ a ‘Branson 46’, or 14m of steel trawler style motor yacht. It seemed that a buyer had pulled out and the owners having bought another boat just wanted her sold. 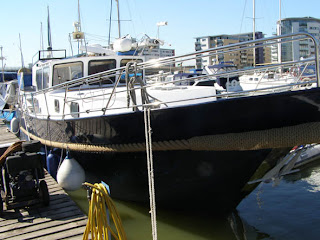 Antiope unloved in a London Dock
With a bit of courage, a survey, sea trial and a huge leap of faith, we became her new owners, with co-conspirators Roger and Robyn who have been working alongside us on this project for the past two years.
The deal done, we had a hasty planning meeting before our new partners had to fly home that same evening back to work and family in Australia.
For us, a run up the Thames to check that the essential systems worked seemed like a good idea, also a chance to visit friends in Shepperton, and to the familiar non tidal waters that we knew from Water Gipsy days. 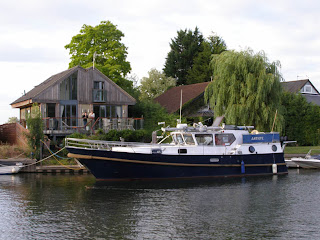 Visiting friends in Shepperton
We were learning more every day as we delved into Antiope’s past, finding papers and records in various drawers.  She learnt that she was built to cross the Atlantic and explore polar waters but more of that later.
We quickly gained confidence in her good natured handling ability. But it was clear that recent years of neglect demanded a haul out for a good bottom paint and to give us the opportunity to set her up for European waters.
Burnham on Crouch came up in conversation as an affordable place to do the work. So here we are. We had an interesting run down the Thames in typically stormy July weather, vivid memories of estuary shallows and tidal currents times came rushing back. Many centuries of silt have washed down the river and settled in a web of very tricky sandbanks. Wind turbines now march out along these ridges. We had to voyage 8 miles out to sea before there was enough water for us to turn north and head back inland and up the river Crouch for a well earned beer.  Burnham can still boast 15 pubs,
4 yacht clubs, and a yacht marina that did not exist when I last sailed here. 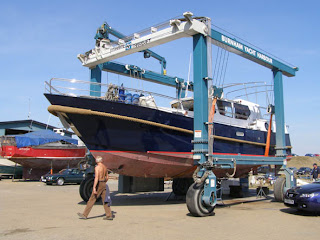 Hauling  out at Burnham, ready to start work on the hull


Charles and Annie
Posted by Charles Scoones at 02:04 No comments: