Simon Evans owns and runs his Boatyard in Migennes France, I suspect as an excuse to support his passion for collecting and restoring old lifeboats. Aboard 'Earnest Dresden' he hoists her new sails for the first time in over 80 years.
To anyone who has ever been involved in boat restoration the task looks overwhelming, but we were here 5 years ago and have seen the progress. Simon says that this is his own collection and if he were to part with any of his lifeboats, it would be on strict condition that they returned to their old stations and were kept in their original form. 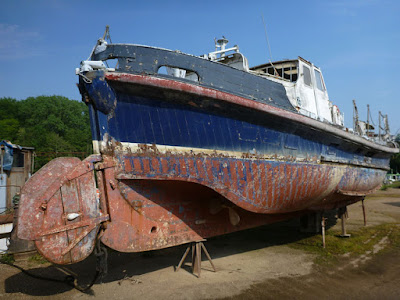 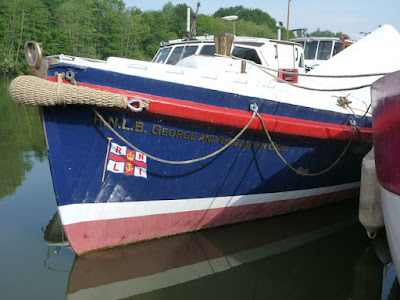 Another RNLI  craft  afloat and ready for the show. 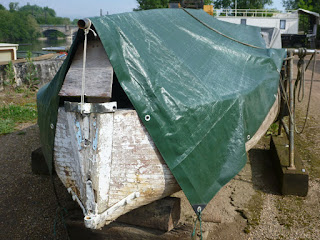 Under wraps is one of only a few surviving wooden airborne lifeboats designed to be light but strong enough to be dropped from an aircraft. Built by 'Fairy Marine' they were the forerunner of the popular British post war 'Atalanta' yachts.

Aboard Antiope, our fitting out is moving along steadily, slowed by patchy weather, lifeboat restoration and French public holidays. We are expecting the new deck to be fitted next week and canopy work to be completed.  Looking forward to getting back afloat soon.

Meanwhile we are enjoying the social company of other boaters working on their own craft around us.

Posted by Antiope Cruising at 00:51 No comments:

Springtime and back aboard

We have arrived back aboard Antiope in Migennes to find that all is well with our ship. she has survived the winter storms that swept through France. My crude framework still intact. 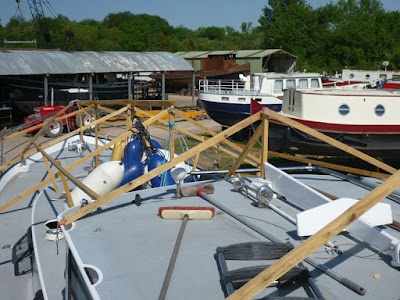 A warm Spring day at the Boatyard . Tarpaulins removed and all is dry

Our first task has been to strip off the old and tired teak decking in readiness for the new Flexiteek deck, a synthetic lookalike which has been made up in La Rochelle over the winter. It was a great relief to find the steel deck underneath the teak still in good condition.


Posted by Antiope Cruising at 23:54 No comments: